Basically it means that, in any tournament, if you get eliminated ‘on the bubble’, you are the last person to be eliminated without making any money. Everybody from then on gets some money.

So what does that do to your playing style? Since you don’t want to be the last sucker who doesn’t make it to the money you start tightening up, right? At least that’s what most players do and it very understandable too.

It’s one way to play it, but you can also play it totally opposite. At least, that’s what I like to do. When I’m playing a sit & go where the final three get paid and it’s down to 4 players instead of tightening up, I like to start playing a little bit looser. Since nobody wants to get eliminated at this point, they all tighten up and you’ve got a real good chance at taking a stab at all those chips that go into the pot uncontested. Nobody seems to want them, so hey, I’ll be a good boy then and take what others don’t want.

By doing so, you accomplish something very important. Because you’re accumulating a lot of extra chips, you set yourself up for a much better position to play after you’ve reached the money. Of course, you’re at risk of getting beat and not making any money at all, but I’m not suggesting you play like a madman, I’m suggesting you play just a little more loose. And if you make it to the money with all of those extra chips, you’ll have a much better fighting chance for first place.

If you’ve read one of my previous tips; Some Sit & Go tactics, you’ll know that it’s important to play for third, and only once you’ve reached third place, you go for first. Never second. While this might seem a bit contradictory, it actually is not. By picking up those extra chips nobody seemed to want, you’ve put yourself in a much better position to take down first place – assuming you reach the money – instead of getting stuck in third or second place. And besides; you’ll be surprised at how easy it is to steal the blinds when you’re all on the bubble.

Of course, had you tightened up as well, you would have given up on a lot of precious blinds, which are ever more important in those late stages of the tournament.

So the next time you find yourself on the bubble, you’ll know what to do. 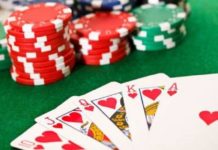 The Future of Blockchain Gaming

The Future of Blockchain Gaming